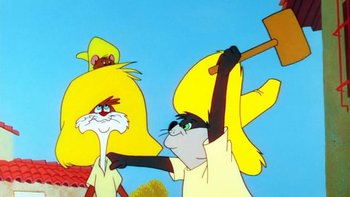 Guess what happens next.
Advertisement:

Mexicali Shmoes is a 1959 Looney Tunes cartoon, starring Speedy Gonzales. It was directed by Friz Freleng.

Two cats, chubby Jose and his skinny friend Manuel, are lazing about, singing badly, when Speedy Gonzales shows up and essentially eggs them into a chase. Manuel is about to take off after Speedy when Jose stops him and tells him that it's no use chasing after Speedy, "the fastest mouse in all Mexico." Jose then explains that they have to use their wits to catch Speedy. Comic hijinks ensue as Speedy proves that he's as smart as he is fast.

One of two appearances of Speedy's cousin Slowpoke Rodriguez, the slowest mouse in all Mexico, who as it turns out has a trick of his own.