I Don't Pay You to Think 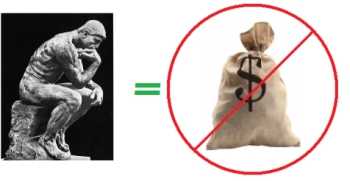 Thinking can be hazardous to your paycheck.
Fezzik: I just don't think it's right, killing an innocent girl.
Vizzini: Am I going mad, or did the word 'think' escape your lips? You were not hired for your brains, you hippopotamic land mass!
— The Princess Bride
Advertisement:

A Stock Phrase that indicates that an employee wasn't hired for their brains.

Sometimes, it's important to think on your feet. A mind is a terrible thing to waste and a little brains can take you a long way. But people in authority sometimes fear those with a brain in their head. After all, someone who thinks is someone who may start to question authority, their authority. The basic idea is that someone in a lowly position gets a bright idea, but is told that either they're not paid to think, or that it's not their job to think, or some other form of that. Might be a low-level employee in a company, or it could be something like a minion to the Big Bad.

To some degree, Truth in Television; many large organizations, such as the military, depend on everyone sticking to the same plan, and it isn't always reasonable to convince or fully explain it to each and every person involved, so acting on individual decision-making instead of instructions can undermine your organization's larger goals. A soldier who thinks too much and doesn't obey orders is therefore considered a liability. It's worth pointing out that despite the listed benefits of groups following the same plan, a good point or idea shouldn't just be thrown away carelessly.note After all, much like parents and teachers, senior officials are not always right.

In the end, however, bosses who hold to this philosophy only have themselves to blame when they find themselves Surrounded by Idiots. If this is common in your work place, it's one of the sure signs your boss is unfit for the job.

If the boss or Big Bad is seriously annoyed by this thinking behavior, he may demote said employee/minion to an even lowlier position, fire them (sometimes literally), or tell them You, Get Me Coffee.

Note that actual payment, or non-payment as the case may be, need not necessarily be involved - "I don't pay you to think" is in many cases just as much an attitude as it is a phrase actually spoken out loud.

Can overlap with I Warned You if the villain disregards something their henchman was trying to tell them, and it ends up being fatal. If your role is a Yes-Man, then you can simply assume that this is true and shouldn't need to have it said to you.