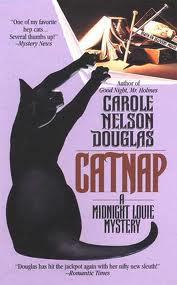 "So, there you have it, the usual human stew—folks good, bad, and hardly indifferent—totally mixed up and at odds with one another and within themselves. Obviously, it is left to me to solve all their mysteries and nail some crooks along the way. Like Las Vegas, the City That Never Sleeps, Midnight Louie, private eye, also has a sobriquet: the Kitty That Never Sleeps. With this crew, who could?"
—Midnight Louie - "Previously in Midnight Louie's Lives and Times..."
Advertisement:

The author describes the style of the books as reminiscent of Damon Runyon, while Louie himself has been described as being the type of cat that either Mike Hammer or Columbo would have. Later installments see Louie being joined in solving crimes by his daughter, Midnight Louise, as part of "Midnight Investigations, "Inc." Since Cat on a Blue Monday, all proceeding novels in the series have featured a color from the next letter in the alphabet— Cat in a Crimson Haze, Cat in a Diamond Dazzle and so on. In 2015, the original two titles in the series were reissued as Cat in an Alphabet Soup and Cat in an Aqua Storm respectively. The author also announced that a final Z novel would not be enough to wrap up all the loose ends of the series and after the release of Cat in a Zebra Zoot Suit, the series would conclude with a final novel titled Cat in an Alphabet Endgame.

Carole Nelson Douglas is also the author of the Irene Adler historical mystery series, and the Delilah Street Paranormal Investigations.