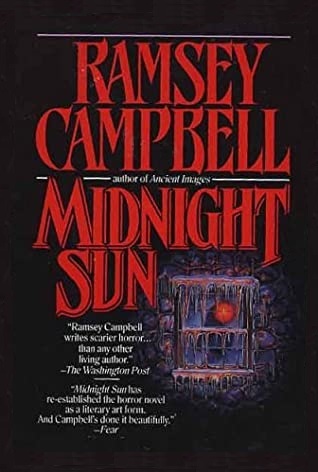 The Sterling family is in the grip of something absolutely chilling.
Advertisement:

A 1990 horror novel by Ramsey Campbell.

Ben Sterling's family have all died in a mysterious incident. After being sent to live with his aunt Beryl, the 8-year-old runs away to the village of Stargrave to visit their graves. While in the Stargrave Cemetery, he sees something floating in the air that sends him into a trancelike state. Upon returning to his aunt's house, Ben finds a book called Of the Midnight Sun written by his great-grandfather, Edward Sterling. This ancestor was a folklorist who ventured into some of the coldest regions of the world to collect stories passed down through countless centuries. He was regarded as an eccentric, with his descendants being looked askance by the townspeople decades after his ill-fated adventure into the Grim Up North. Ben's aunt does not hold a high regard for the Sterlings herself, and takes the book away from him after she catches him sneaking a glimpse at it.

Over twenty years later, Ben is a successful children's book author. His aunt has passed away and Ben feels a strong pull to move back to the town where he spent his early childhood. Not long after he arrives in Stargrave with his wife and two children, mysterious happenings suggest that the town has sinister plans for the Sterlings.