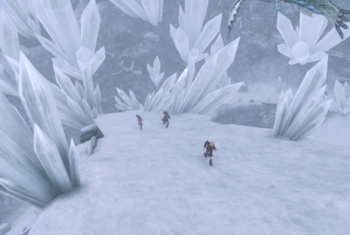 Looks cold.
"My soul is spiraling in frozen fractals all around!"
— Elsa, Frozen (2013)
Advertisement:

In real life, ice is frozen water, meaning that it can take on a variety of shapes because of water's fluidity. You can have tall pillars, vast sheets, or even irregularly shaped ice formations. Melting and refreezing can also have a wide variety of effects on ice's shape, as well as its colour too; a good quantity of the ice in glaciers and icebergs tends to turn a very nice light blue colour, as air pockets inside naturally get forced out of the ice over time. Ice can also have a wide variety of colours depending on what's inside the water that makes it up - Take these icebergs

, which bear striking stripes of rock and other debris gathered up before they were calved, with some even looking like big boiled sweets!

In fiction, ice tends to be portrayed as having a crystalline shape. You know the kind, with the perfect edges, tapering points, absolutely clear, perhaps there are "spikes" that jut out at odd angles. Whatever the case, if you were to hold up, say, a quartz crystal next to a fictional ice crystal, they would look identical outside of possibly color.

Why this is so is unclear. Snowflakes do follow a hexagonal crystalline pattern, so this takes that and applies it to ice in general. Perhaps it is simply for the visual cue, something to let the viewer know "This is definitely a Slippy-Slidey Ice World", or something as simple as The Coconut Effect, where it has become so ubiquitous, it's now expected.

It could also be because, etymologically speaking, the english word "crystal" evolved from the Old English word cristal which meant "clear ice", which in turn evolved from the Greek word kryos meaning "frost", which itself evolved from the proto-Indo-European prefix kreus-, meaning "to begin to freeze". Whatever the case, there is a clear connection between crystals and ice as portrayed in fiction.

Compare with All-Natural Gem Polish, when gems themselves are found perfectly cut and faceted in the wild. Can sometimes overlap with Instant Ice: Just Add Cold!, especially when characters are frozen and emerge as perfectly cubical ice blocks.