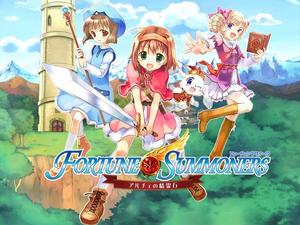 From left to right: Sana, Arche, Chiffon, and Stella
Advertisement:

Fortune Summoners: Secret of the Elemental Stone is a sidescrolling Action RPG created by LizSoft in 2012. It has some platforming elements as well. After making an impact in Japan, it was localized and released in the West by Carpe Fulgur (of Recettear and Chantelise fame).

The plot centers on the adventures of the heroine, Arche, who has just moved to the town of Tonkiness, and her two friends as Arche seeks a stone for school and an exciting quest unfolds.