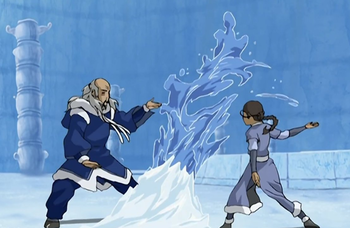 Ice and water are two very common elemental properties to give characters in works of fiction. However, perhaps more than any other pair of elements, they are very close. After all, ice is merely frozen water, and thawing it out will make your ice attack a water attack.
Advertisement:

Thus, some works portray ice and water as the same element. A character's element may be said to be water, but they will still have command over ice. In video game terms, ice and water-based attacks may be considered the same for purposes of Elemental Rock–Paper–Scissors. Other titles may play with this idea to various ends. Because Water Is Blue, when this trope is at play, expect Blue Means Cold to also be.