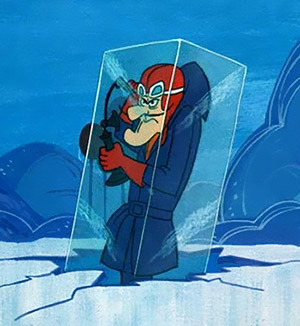 Dick Dastardly is a really cool guy.
"Brrrr! It's cold! I better keep moving or I else I'll freeze to square!"
— Stinkoman, Stinkoman 20X6
Advertisement:

You ever notice how, in some fiction, especially cartoons, things or people that are subject to extreme cold not only get frozen, but get frozen into a huge block of ice? Even though there's no water around to freeze? That's this trope. Think of all the times you've seen a character who was shut inside a freezer sliding out in an ice block the exact shape and size of the freezer itself. Where the hell does the ice come from? After all, the miniscule amount of water in air is just barely enough to cover something in a layer so thin it's barely noticeable (not to mention that somehow all that water condensates on the person in question, instead of everything in vicinity).

This may also apply to characters who have fallen into cold water and come out in a block of ice; if the water isn't cold enough to have frozen already, then, once again, where does the ice come from?note This trick actually DOES work with extremely pure water. proof

. The reason for this is that extremely pure water actually has a much lower freezing point than regular water. Water needs a contaminant particle to anchor it, give it something to freeze on. Without it, water just won't freeze. Dropping a single particle of dust into a container of very pure, superchilled water will cause a massive chain reaction freezing all the water in the container.note 2 It is also possible to achieve with other water solutions. Having certain thing, like salt or alcohol, in solution with water lowers its freezing point. Thus it is possible to super chill such solutions below water's "normal" freezing point. Applying a sudden agitation to a liquid in this state can cause the water molecules to come into contact with one another which sparks instant crystallization. Often done as a bar trick by smacking the bottom of a super cold bottle of beer, but dropping something into such a super chilled liquid could also set the reaction off. Note also that the block of ice in question has the strange tendency to come out in the shape of a perfect cuboid.

(Sidenote: Just so we're clear on the distinction, Elemental Baggage is when magic spells and the like have the inexplicable ability to create the element in question [such as ice] from thin air; this trope is when ice appears simply because something is cold. Therefore, only cold/freezing spells that aren't specifically making ice fall under this trope.)

When the environment suddenly gets snow and ice just because it's cold, then the trope is Snow Means Cold.

If Stinkoman doesn't move in Level 7, the ice level, he'll freeze into a square from the cold and take damage when he thaws.

If Stinkoman doesn't move in Level 7, the ice level, he'll freeze into a square from the cold and take damage when he thaws.