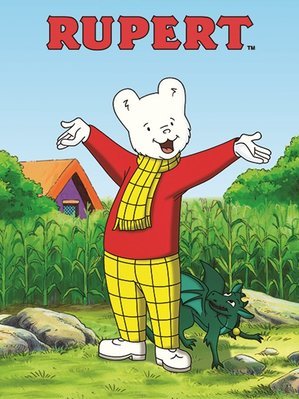 Bill: Remember you told me you woke up this morning feeling there was an adventure just around the corner?
Rupert: Yes...
Bill: Well, next time you get that feeling, do me a favor, would you?
Rupert: What's that?
Bill: GO BACK TO BED!
—"Rupert and the Lamp"
Advertisement:

Rupert is a 1990s adaptation of the British children's comic strip Rupert Bear. The show was produced by the world-famous Canadian studio Nelvana, and lasted for 5 seasons and 65 episodes (1991-1995, 1997). It originally aired on Canadian kids channel YTV as one of the very first animated series to be produced for the channel, but also appeared in the States on Nickelodeon (and later CBS) and in Britain on CITV.

Like the comic strip, the show's two dominant themes were adventure and friendship. Rupert's passion for adventure, discovery, and mystery was only matched by his desire to see everyone become friends and be as happy as he knew they could be.

In addition to its Science Fiction and Fantasy Kitchen Sink setting containing Lions and Tigers and Humans... Oh, My!, what made the show stand out from other shows of the era (and after) was:

Every episode is on Youtube, thanks to Nelvana's Treehouse Direct channel. Check them out here!

Tropes appearing in the CGI cartoon (unrelated to the Nelvana series):

Rupert and Bill in Gameland

Bill learns why he always beats Rupert every time they play games.

Example of:
I Let You Win

Rupert and Bill in Gameland

Bill learns why he always beats Rupert every time they play games.