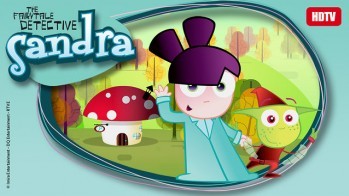 Sandra the Fairytale Detective is a Spanish animated television series created by Imira Productions. The series revolves around a young girl named Sandra who solves mysteries that take place in a world of fairy tales with her friend, Fo the elf. Surprisingly, a lot of action tends to happen when Sandra goes about solving the various mysteries. Something of a Spiritual Successor to Lola & Virginia, as it involves a similar animation style (and Sandra even watches the show in one episode