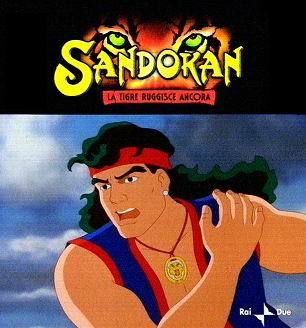 Sandokan - The Tiger of Malaysia (Sandokan - La Tigre della Malesia) is a 1998 animated series produced by Italian companies RAI and Mondo TV. It is based on the eponymous Sandokan novel series penned by Emilio Salgari.
Advertisement:

Sandokan is a young man living on an island of Singapur along with his mentor Macassar, who has taken care of him since he was a baby. But after the death of the old man, Sandokan receives shocking news: he is the son of the rajah of the lost kingdom of Kiltar, which was killed in an invasion by Dayak warriors. Seeking for the truth and the key to his origins, Sandokan travels to Labuan and meets the British governor James Brooke, who soon proves to know more than he says...

This is the beginning of Sandokan’s adventures as a pirate leader in the search of bringing Brooke to justice and getting back his kingdom. He will be aided in this perilous task by the Portuguese adventurer Yañez (and his lizard pet Paco!), the Indian shaman Tremal-Naik, the street urchin Kammamuri and of course Brooke’s own niece Marianna, Sandokan’s love interest.

The series, originally of 26 episodes, was followed by a second season, Sandokan - The Yiger Roars Again (Sandokan II - La tigre ruggisce ancora), and yet a third one, Sandokan, The Two Tigers (Sandokan III - Le due tigri).

The first season was fairly popular in Spain, even if it clashes in collective memory with another Sandokan cartoon produced by Spanish company BRB International some years before (though they are pretty easy to tell apart, as the Spanish series was a more kid-friendly cartoon with Anthropomorphic Animal). Both cartoons's opening themes are particularly remembered, and not only for being catchy, but also for being played by the brothers De Angelis, who reprised their theme from the 1976 TV series starring Kabir Bedy as the eponymous hero.