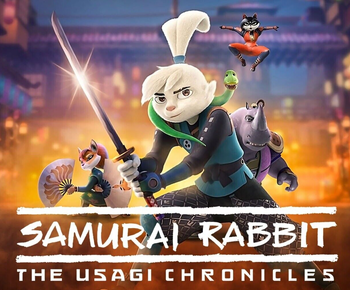 Samurai Rabbit: The Usagi Chronicles is a 2022 Netflix All-CGI Cartoon based on Stan Sakai's comic series Usagi Yojimbo. Rather than being an adaptation of the comic, however, it takes place several centuries later and centers around Yuichi Usagi, a distant descendant of the original Miyamoto Usagi, who has grown up hearing tales of his famous samurai ancestor, and dreams of one day becoming a great samurai warrior too. Season 2 was released on September 1, 2022.

Together with his pet tokage lizard Spot, Usagi leaves his aunt's farm for the big city of Neo Edo in order to become a big hero, protect the innocent and fight evil wherever he finds it — but he quickly finds that things aren't as easy as all that. In Neo Edo, Miyamoto Usagi is remembered as a villain and a ruthless murderer, to the point where his name is synonymous with "traitor," and any descendants of his are viewed with deep suspicion. It doesn't help that Usagi has a tendency to rush in and attack before actually finding out what's going on, which quickly lands him in trouble with both the law and the local organized crime gangs.

When he accidentally releases a whole slew of entrapped yokai on the city, leading to a lot of chaos and destruction. Usagi's got a lot to learn if he, together with the Ragtag Bunch of Misfits he befriends, is going to clean up the mess he made, clear the name Miyamoto Usagi, and learn to become a real samurai warrior.

This show should not be confused with Space Usagi, a comic miniseries and proposed cartoon that would also have focused on a futuristic descendant of the original Usagi.