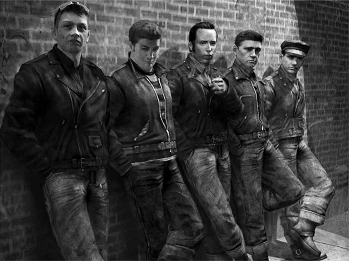 Coming soon to a gas station near you.
Grady was a member of the new school of juvenile delinquency, the You-Too-Can-Be-A-Rebel School. The headmasters were Elvis Presley and the spook of Jimmy Dean, and the entrance requirements were completely democratic. A boy was no longer excluded from the glamorous ranks of the delinquents simply because he had the rotten luck not to be born in a slum; all he had to do was look as though he had. If he would wear his hair in a duck-tail cut and his sideburns at nostril level, forsake grammar, dress in black khaki trousers with the cuffs narrowed to fourteen inches, never do his homework, and spit a lot, his origins, no matter how respectable, would not be held against him.
— Parenthetical sidebar, Rally Round the Flag, Boys!
Advertisement:

You've seen them in nearly every work set in The '50s, and to a lesser extent, early-middle of The '60s and very early Seventies. The kids with slicked-back hair, leather jackets, and blue jeans, who listen to Rock & Roll and Rockabilly, drive fast cars (often souped-up 1930s hot rods or 1950s Corvettes or T-Birds), ride motorcycles, drink, sometimes gamble and smoke cigarettes. Greasers, also known as Rockers, Ton-Up Boys, and Hoods.

Greasers were a common subculture of the 1950s and early 1960s, known for their rebellious attitude and love of Rockabilly music. Most greasers were working-class or lower-class, often coming from an Irish, Italian or Latinonote This use of the word "greaser" is probably not related to the earlier use of the word in the nineteenth and early twentieth centuries in the Southwestern USA as an anti-Mexican ethnic slur. background. (This is the core reason that a lot of greasers in fiction tend to have either Irish or Italian surnames, such as Arthur Fonzarelli or Dally Winston.) The trend was big in the 1950s and most common in the Northeast, Midwest, Southwest, California and even parts of the upper South like in Maryland and Virginia that had sizable ethnic communities or contact with such. Many greasers formed street gangs, although the culture existed outside of gang life as well. Greasers began to fade out in the latter half of the 1960s and were pretty much gone by the mid-1970s.

In Great Britain, they were called rockers, and lasted well into the 1970s, fighting the mod subculture left and right. In a way, they were the predecessors to Gangbangers (the earliest street gangs of the contemporary era were greasers; more current gangs didn't really pop up until the end of the Sixties and into the Seventies), as well as the punk subculture (both were all about youth rebellion and rock music, although rockers, the descendants of greasers, fought against mods, the predecessors of punks). Even though the greaser subculture is long gone, its influence is felt today in fiction and real life; the much-hyped feuding between mods and rockers gave birth to the phrase "moral panic".

In addition to American Greasers and British Rockers, there are also other foreign takes on the greaser subculture.

The Greaser Delinquent is today more or less a Dead Horse Trope outside of period pieces. Since the original greasers tend to be today already grandparents if not great-grandparents, the today's greasers tend to be more like history re-enactment and keeping the 'Golden Age of Rock and Roll' legacy alive rather than being antisocial louts. For example, most Raggare in Sweden tend to be rather respectable members of the society, and building, restoring and customizing historical American (and Swedish) vehicles and playing live rockabilly and rock and roll music is a hallmark of their culture. Many of the women either sew their clothes from original materials and patterns, or restore authentic clothes of the era.

The greaser is now an iconic stock character of The '50s.