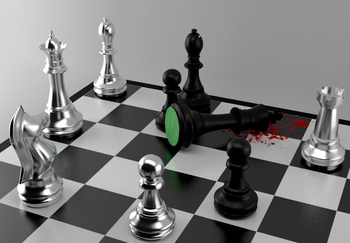 .
"Suffer-Not-Injustice Vimes wasn't a pillar of society. He killed a king with his own hands. It needed doing, but the community, whatever that was, didn't always like the people who did what needed to be done or said what had to be said."
— Feet of Clay
Advertisement:

A character, for one reason or another, assassinates the King, the Emperor, the President, that one powerful guy whose position has massive mystique and glamor and charisma attached to it, no matter how badly they chose to use it. Usually the one to kill him is of the Praetorian Guard or someone equally close and trusted. However, it doesn't need to be a betrayal: it could perfectly well be an absolutely lawful execution after a fair trial. It won't matter to the people. He or she has slain a King.

The reason why killing a monarch has always been such a big deal is twofold: one aspect of it is that before the rise of nationalism, the monarch was the carrier of the state's sovereignty (afterwards, it was the people through the social contract). In simpler terms, the king was his country, so anyone attacking him automatically set himself against all the state institutions. Likewise, any revolution against the King was effectively de-legitimizing all the institutions (Church, Army, Titles) that had formerly depended on royal patronage, or which had legitimized royalty before. Kings who ruled by Divine Right were likewise considered to be ruling with God's approval—and anyone attacking an anointed king automatically infringed upon God's prerogative of deciding who is a suitable king and who should go. This is especially the case in nations like England and Russia where the Kings were part of the Church hierarchy as a whole. However, there were some theoreticians who allowed Tyrannicide. Additionally, monarchs had very good reason to disapprove of regicide, even towards rival monarchs, since they obviously wanted to discourage any thoughts of disposing of monarchs in general.

This is one reason why killing a president (while a serious crime and probably high treason — as is the murder of any high-ranking state official) does not pack the same punch in modern days, even if some Presidents have become glorified into King-like figures. However, because attacking the person and office of the King is essentially an action against the state, people in modern societies are not too keen on stories about attacking royalty either, even more so when royalty is brought to trial, since that would imply that any and every head-of-state and their respective governments can be brought to trial. A precedent which even the most advanced democracies are rarely interested in putting into practice or enforcing for a variety of reasons.

Expect them to never be allowed to forget it, and carry this moniker or a variation thereof for all their lives, if they don't get executed for it. In some instances this is an attempt to get a Klingon Promotion, possibly involving The Coup. May overlap with Hero Killer. Someone aiming to Kill the God is not satisfied with mere mortal monarchs, though the tropes may overlap if they target divine monarchs. This trope also usually doesn't apply to killing a King in battle. In this situation, the character is not the Kingslayer, but rather The Usurper (if he gets Historical Villain Upgrade) and The Conqueror (if he gets Historical Hero Upgrade). This is because there is a sense that defeat in battle and in combat is considered "fair play" as opposed to killing a King by assassination, or even by trial and legal execution.

As a Death Trope, spoilers will be unmarked on this page.

The Murder of Ratking Augustus

In the first 30 seconds. Well, it is "a film about love and regicide".

The Murder of Ratking Augustus

In the first 30 seconds. Well, it is "a film about love and regicide".