Literature / The Saga of the Jomsvikings 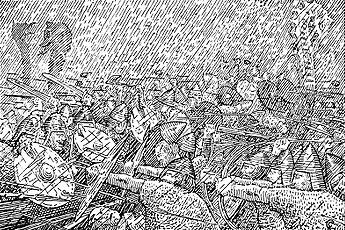 "Hailstorm at the Battle of Hjórunga Bay" (Halfdan Egedius, 1899)
"Poorly would I remember the laws of the Jomsvikings if I shrank from death or spoke words of fear. Death comes to every man."
Advertisement:

Jómsvíkinga saga, i.e. Saga of the Jomsvikings, is a 13th century Old Norse saga, the author being an anonymous Icelander. It is a fanciful historical adventure set in the 10th century, recalling the days of the vikings.

Its first part is dedicated to the rise of the Knytlings, the Danish royal dynasty that was the first to unite Denmark under their rule and built it into the northern European hegemonial power of the late The Viking Age.

The focus then shifts to a clan of Danish warlords, the descendants of the chieftain Toki, and their long history of both rivalry and collaboration with the Danish kings. King Harald "Bluetooth" Gormsson’s ruthless pursuit of unrivalled power leads to a long-smouldering enmity with Toki's clan that only ends when Toki's grandson Palnatoki stirs up a rebellion that overthrows the king and puts Harald's bastard son Svein Forkbeard on the throne.

But when Svein discovers the truth about his father's death, he cuts ties with Palnatoki, and the latter is forced to leave Denmark. A successful commander of viking cruises, he eventually establishes a new base of operations in Vindlandnote The "land of the Slavs" at the southern shore of the Baltic; not to be confused with "Vinland," which is a rather different place., realm of the mighty king Burisleifnote Fictional version of Boleslaw I of Poland

, but the historical data does not really match up., who cedes the Danish sea-rovers a stretch of coast in the land of Jom, where they build the mighty fortress of Jomsborg.note Likely at the Slavic settlement of Wolin, now in Poland.

Having become somewhat snobbish by all their victories, Palnatoki and his lot, henceforward known as the Jomsvikings, decide that only the crème de la crème of warriors can join their club, and establish the law of Jomsborg that makes bravery and recklessness mandatory. Applicants arrive from whom Palnatoki picks the captains of Jomsborg – Sigvaldi, Thorkell the Tall, Búi the Stout, Sigurd Cape, and Palnatoki's own grandson Vagn Akason with his veteran mentor, Bjorn the Welshman. Together, they form the most prestigious viking host to ever haunt the seas, and heap up fame and fortune in spades.

King Svein is not exactly enthusiastic about the unchecked power of the Jomsvikings and their lack of proper obedience to the Danish king. When Palnatoki dies and Sigvaldi takes over the leadership, things seem to normalize - only for Sigvaldi’s double-dealing with Svein to fire a new grudge. Eventually, the crafty king devises a scheme to put the Jomsvikings back in their place—tricking them into a brazen undertaking that can only result in glory... or total destruction.