Literature / The Saga of the People of Laxardal 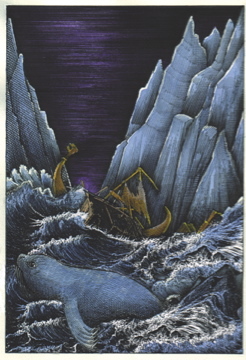 Laxdæla saga—the Saga of the People of Laxárdalr—is an anonymous Icelandic saga from about the middle of the 13th century.

As the grasp of King Harald Finehair tightens on Norway, the Norwegian hersir Ketil Flatnose has it with the king's arrogance and sails to the West to carve out a new dominion in Scotland. But fortune is not kind on Ketil's folks, and after the death of Ketil and his warlike grandson Thorstein the Red, it is up to Ketil's daughter Unn the Deep-Minded to gather the remnants of her clan and lead them to Iceland, where she claims land in Breidafjord in Western Iceland. When Unn's retainer Koll marries Unn's granddaughter Thorgerd, Thorgerd receives Laxardal, the valley of the Laxá (the 'Salmon-river'), as a dowry from her grandmother.

The descendants of Unn and her companions thrive and multiply, but so do conflicts and rivalries. The saga culminates in the life story of Gudrun Osvifsdottir and her four marriages, and the tragic love-triangle that leads to a long and painful family feud that pits the progeny of Thorgerd and Koll against each other.

Laxdæla saga is the most famous of the Icelandic family sagas, and stands out for its focus on women.

Available online as a translation from 1899