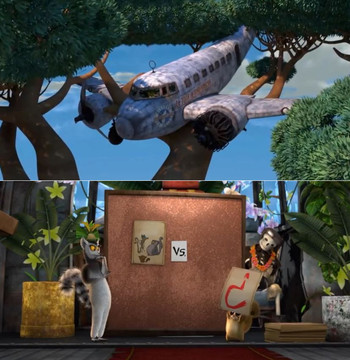 Julien's "castle" from which royal business is conducted and not for sleeping unless someone wants to bunk in.
Realtor: A...lair?
Freddy: Yes. If you have a location like, on a cliff with a castle-esque type thing...
—SHAZAM! (2019)
Advertisement:

The lair. The hideout. Hero headquarters. Home Base. That place to which the heroes or villains return after a hard day of fighting or committing crime. This is where planning takes place and where teams regroup after missions. Generally hidden, but may be ostentatious.

Some variants are exclusive to certain jobs. For example, the Mad Scientist will naturally live in the Mad Scientist Laboratory, and a Cop Show inevitably has a precinct. In a show where a team is wandering around, their Cool Ship, Cool Boat or other cool vehicle may double as Home Base. Larger bases for villains may have a Den of Iniquity for off-hour "recreation".

A home base may also literally be a private home, which makes it all the more personal when a villain breaks in.

Incredibly common, since it's obviously cheaper to shoot in a single recurring set than to build new locations.

Not to be confused with the British hardware store of the same name or getting to home base.

Examples that don't fit in other tropes: