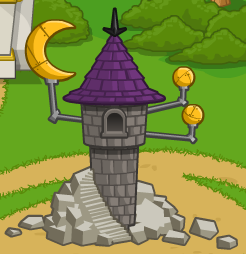 Regular towers for mages are just so old-hat.
"Do you ever wonder why the mages built their tower at Lake Calenhad? Do they have an aversion to practicality or something?"
— Alistair, Dragon Age: Origins
Advertisement:

Wizards often seem to live in towers. Not all of them, certainly, but enough for the tendency to be noticed.

Sometimes these towers are no larger than is needed for a single individual, while other times, they house an entire community of magicians, and may possibly serve as a Wizarding School or the headquarters of The Magocracy. Sometimes they're free-standing, while at other times, they're tacked on to some larger building, such as a castle (especially if the wizard is a Court Mage). It is not uncommon for entry to these towers to be esoteric in nature, keeping the average Muggle from accessing it; anything from having its entry in the top, to having the only entrance magically warded, to having No Entrance at all and requiring magic to enter, though these esoteric entrances also serve to keep those without ability to exit in, making for effective prisons.

May originate from the fact that many traditions link magic with astronomy or astrology, making the top of a tower a commonsense place for a mage to hang out. A high tower also conveys a sense of isolation from "normal" people, which the magician can use to study in peace, much the same way that monasteries are often on mountaintops. In another sense, high towers are ancient symbols of arrogance and hubris.

A subtrope of The Tower, obviously. A tower owned by a wizard of evil-ish disposition will likely double as an Evil Tower of Ominousness.