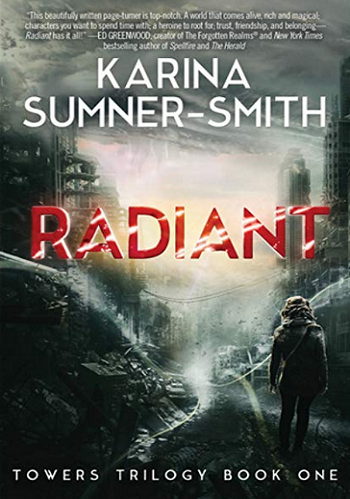 The Towers Trilogy is an Urban Fantasy series by Karina Sumner-Smith.
Advertisement:

Xhea lives in a post-apocalyptic city where magic serves as currency. Those rich in magic reside in great floating skyscrapers called Towers, while the poor must scrape out a living in the ruined Lower City below, always wary of the night walkers which emerge from the wastes to savagely murder anyone caught without shelter.

Life is particularly difficult for Xhea because she has no magic at all, meaning she is perpetually broke. Even if someone else transfers magic to her, her body can't process it; it quickly burns away while affecting Xhea like a drug.

Her complete lack of magic does offer one advantage in that it allows her to go into the city underground, which is painfully toxic to those with magic, in order to recover antiques from before the Fall. She also has another useful talent: the ability to see ghosts, a rare power that allows her to mediate between the dead and living and assist those who suffer from hauntings. Between the artifact-hunting and the ghost work, she's just barely able to keep herself fed.

Everything changes for Xhea one day when a man comes to Xhea dragging the ghost of a girl behind him. Xhea offers her usual services; but the ghost, Shai, turns out to be anything but usual. She is a Radiant, a wellspring of magic power; and even dead, her ghost produces more magic power than everyone else in the Lower City combined. Suddenly in possession of a fortune which she herself cannot use but which anyone else would kill for, Xhea finds herself suddenly beset by enemies from all sides. And as she fights for her life and Shai's freedom, a dark magic begins to awaken within her: an uncontrollable power which threatens to bring death to all around her.

The series consists of Radiant, Defiant, and the forthcoming Towers Fall.

The Towers Trilogy includes examples of: