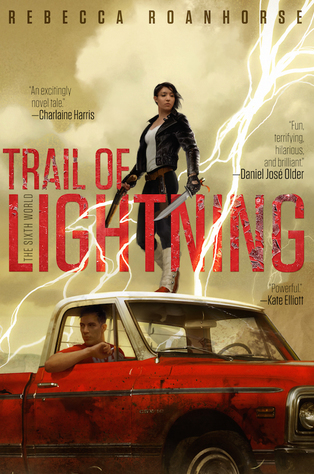 Everything you've done, your past, it's all just a story you tell yourself. Some of it is true, but some of it is lies.
"But I had forgotten that the Diné had already suffered their apocalypse over a century before. This wasn’t our end. This was our rebirth."
— Maggie Hoskie
Advertisement:

Trail of Lightning is the first novel in The Sixth World series, a post-apocalyptic Urban Fantasy by Rebecca Roanhorse.

During the 21st century, the world is devastated by the Flood, a world flood of supernatural origins, which devastates the world and causes the collapse and disintegration of civilization and society. Following the disaster, the indigenous reserve of the Dinetahs becomes an independent state, declaring independence from the United States of America. Further, some Navajo populations have developed magical and supernatural powers, the Clan Powers, based on their ancestral tribes.

In Arizona, witches, monsters and demons have spread after the return of magic, and are fought and opposed by special monster and witch hunters.

Maggie Hoskie, a bounty hunter of monsters with a traumatizing past, is flanked by Kai Arviso, a nephew to a friend of hers, and is committed to fighting a new and mysterious race of monsters.

Trail of Lightning contains examples of: