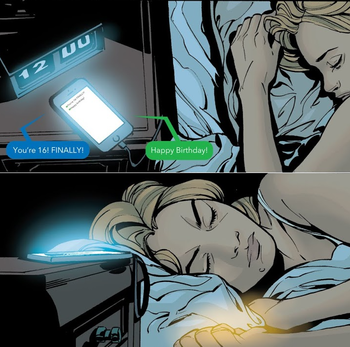 "Sixteenth birthday, but do I get a Vespa? No. I get a food processor and a killer flying troll!"
— Jim Lake Jr., Trollhunters, "Bittersweet Sixteen"
Advertisement:

There may be no more unfortunate age to turn than sixteen, especially if you're female, although in all media male examples exist too. While there are dangers inherent in simply existing, celebrating one's sixteenth birthday is one of the most obvious. Generally, this entails the manifestation of powers, possibly some Ancient Conspiracy or prophecy, and the end of a "normal" life for the character in question. Growing Up Sucks.

There are some Real World reasons why 16 is often chosen as The Age At Which Shit Happens. Although the hormonal hell known as puberty actually starts a few years earlier, sixteen tends to be when the teenager finally has those changes under control and starts to act (somewhat) more like an adult, which is reflected in how teenagers' bodies sexually mature (on average) by 16; thus, in many cultures, 16 was the effective age of majority. Even though Western culture prefers to wait until 18 to confer legal adulthood, in the U.S. 16 is still the minimum age for a driver's license and many types of employment (both very important milestones of adulthood, independence, and/or general social status). 16 is actually the official age of consent in 31 states, and in the United Kingdom. note Pennsylvania, despite having it at 16 on paper, has it at 18 in practice; several states allow loopholes for 14- or 15-year-olds; and several other states have provisions that allow 16- and 17-year-olds to consent to sex with adults under 23. On the flipside, in many jurisdictions 16 is the minimum age at which a minor accused of a crime may be tried and punished as an adult rather than through the juvenile justice system. And in Asian media, let's not forget that 16 is four times four.

From a media perspective, 16 is also a transition age from works specifically intended for tween/teen consumers towards the mainstream adult audience. Notice, for example, how in the Harry Potter series, each year's installment is noticeably darker and aimed at a higher reading level than the last, with Book 6 (when Harry turns 16) marking the point at which the writing style and tone become level with mainstream adult fantasy novels.

Subtrope of Liminal Time. Often overlaps with The Hero's Birthday as the precise moment at which everything hits the fan. See also Bittersweet 17, for when seventeen is more of a melancholic growing-up age. Also see A Birthday, Not a Break, when bad things happen on any particular birthday.

Spencer attempts to surprise Carly on her birthday by making a gummy bear table lamp, but it ends up burning down her bedroom.

Spencer attempts to surprise Carly on her birthday by making a gummy bear table lamp, but it ends up burning down her bedroom.