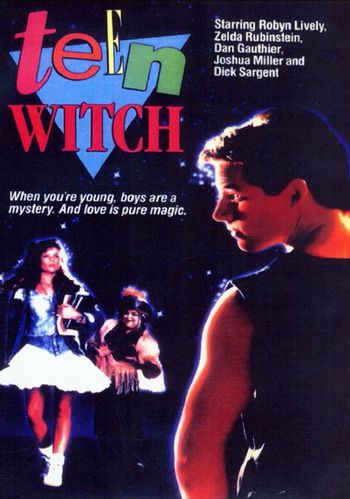 Teen Wolf came out in 1985 as a fun, relatively harmless comedy film, but it mostly catered to boys. Why not have a version that approached the other market? But we obviously can't have a teen girl running around as a beastly werewolf. So let's make her a Cute Witch, instead!
Advertisement:

Teen Witch is a 1989 film that began life as the above scenario, but eventually diverged enough during production to gain an identity of its own. It's the story of Louise Miller, a shy high school student, who one night discovers — with the help of a Fortune Teller, Madame Serena — that she is a reincarnated witch whose powers will manifest on her (Not So) Dangerous 16th Birthday. Serena then provides Louise with a Spell Book to practice her powers. With them, she hopes to overcome her unpopularity, date the guy of her dreams, and maybe even help out her friends with their own problems. But is it all worth it in the end?