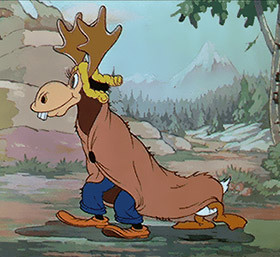 This trope is when two or more characters, usually for reasons of comic relief or Fanservice, share a costume/disguise, be they friends, rivals, main characters, mooks, or even (for bonus points) arch enemies.

An example of the trope is the classic four-legged Pantomime Animal costume (where one character plays the head and front legs, while the second plays as the butt of the joke... literally). Other times it'll be less obvious, where a dwarf might sit on the shoulders of a giant and have a concealing jacket (or the like) to make the look of a Genius Bruiser, or to simply get both characters past an obstacle without leaving one of them behind. A more cunning way of doing this involves a latex suit but sometimes this can backfire due to the strain of too many people in one costume, or the opposite, not enough strain to look "natural". In Real Life, this is often the case when any character with multiple heads is portrayed in live action, with several performers (one for each head) sharing an oversized costume, notably with the Three-Headed Knight in Monty Python and the Holy Grail.

A supertrope to the Totem Pole Trench. Not to be confused with Fusion Dance or Grand Theft Me, but somewhat similar to Sharing a Body in some cases.