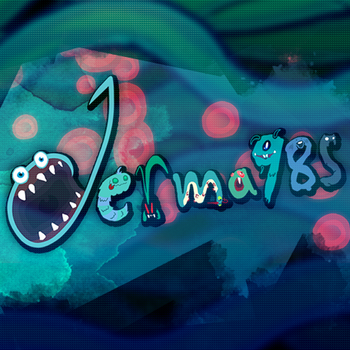 Jerma985 (real name Jeremy Elbertson) is a gaming and comedy streamer, formerly focusing on a YouTube channel before he made the switch to Twitch streaming. While Jerma was once known for his Team Fortress 2 and other gaming videos, alongside being the hilarious vitriolic best bud and butt monkey on many of STAR_'s videos, he has since come into his own. He is hilarious in a very unique way and oftentimes insightful in his gaming videos and livestreams, playing various video games either by himself or with other people.

Jerma's old YouTube channel had a couple of now-discontinued mini-series: 'Grandpa Plays', in which he role-played as his own grumpy grandpa, and 'Scare Saturdays' where he played horror games every Saturday. He was mostly known for focusing on TF2, though he has since moved on from the game. One of his most prominent series is the 'Jerma Rumble', which is a Massive Multiplayer Crossover featuring original and/or existing characters from anything, from video games to cereal mascots, duking it out in a WWE-style Royal Rumble setting. From this has spawned the Jerma Wrestling Federation, a long series of wrestling matches made using the annual WWE video games. He has also delved into live-action comedy from time to time, whether it be silent films featuring Pac-Man, stage magic shows, taking a hot air balloon across America, chat-interactive gaming streams, or even reading Choose Your Own Adventure books. He is consistently one of the most creative streamers on Twitch.

Most of his new content is on his Twitch channel, found here.

On YouTube he has shifted to his second channel "2ndJerma,"

where condensed highlights of his streams are uploaded. They are edited by a team led by Holy Mackeral the Third, who used to make unofficial compilation of Jerma's VODs on his own channel.

His brief experiments in 3D movie making, Rat Movie: Mystery of the Mayan Treasure and its sequel, now have their own page.

TROPES ARE PAIN, I HATE-

Example of:
Two Men, One Dress