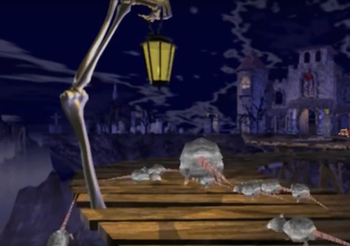 And one of the rats walked off a cliff.
"Rats, we're rats
We're the rats
We prey at night, we stalk at night
We're the rats"
Advertisement:

Rat Movie: Mystery of the Mayan Treasure is a 5 minute comedy crime thriller short film uploaded to Youtube by content creator Jerma985, on the 6th of November 2014. It follows three thieves and their attempt to steal a treasure chest containing priceless Mayan treasure. The video was entirely created with 3D Movie Maker, featuring voice acting from Jerma and two of his YouTube friends, STAR_ and Boo.

The video was an instant hit with Jerma's fanbase, and later regained popularity when it was featured in a livestream by Vinesauce on the 23rd of January 2018. Six months after the video's release, on the 7th of April 2015, a sequel short film was uploaded under the title Rat Movie 2: The Movie, double the length of the original.

On April 2021, Jerma proudly hosted a Reanimated version of the original video on his second channel, featuring 43 different animators.

Sgt. Scritchy-Scratch claims the Cat Police have "saved the world" before being proven otherwise.

Sgt. Scritchy-Scratch claims the Cat Police have "saved the world" before being proven otherwise.