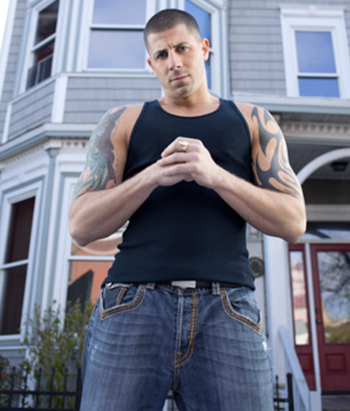 "Your ***in' family's dug into the Southie projects like ticks. Three-decker men at best."
Gibbs: Says here you're from Boston.
Petty Officer Drew: South Boston, actually.
Gibbs: Does it matter?
Drew: If you're from Boston it does.
— NCIS, "Sub Rosa"
Advertisement:

In fiction, this mostly Irish-American neighborhood and its still-distinct accent continue to be associated with hard-drinking working-class thugs, organized crime and dollar donations to "freedom fighters" whose bombs happen out of sight and out of mind on the other side of the Atlantic. Providence, Rhode Island is usually mentioned to suggest scope. It might be the base of a rival syndicate. As a general rule, they're put in opposition in fiction as Providence has a strong Italian-American background, so obviously it's a hotbed for The Mafia.

The real Southie is, in actuality, much less dangerous than in years past. It's been heavily gentrified in the last decade, and a large portion of the population today consists of yuppies. These days it's Charlestown, on the other end of the city, that's more stereotypically Irish (it was the setting for The Town), and even that is slowly being gentrified. As with New Englanders in general, Southie folk are really nice people — on the ten or fifteen days a year when it isn't freezing cold or blisteringly hot outside.

That said, we must strongly caution readers against wearing anything with a New York Yankees logo when visiting anywhere north of Hartford and/or or east of the Green Mountains. Wearing orange in South Boston, especially on St. Patrick's Day, is also not a very smart thing to do. (Oh, you're free to wear it... just wear something else over it. Like body armor.) Also, if you see a lawn chair in a parking space, don't touch it. As for the Irish bars, the shittier ones are also the more authentic ones; if it has a name like "Finnegan's" and has a dimly-lit entrance sign with a coffee can overflowing with cigarette butts out front and a bunch of patrons named Patrick, Sean, or Shane, you're a). looking at a very authentic Southie Irish bar and b). not getting very far unless you're Irish yourself.

The good folks of Boston hope that Hollywood will eventually stop assuming that fun things can only happen in New York City, and that someday we will get a movie set in Boston about sunshine and happy music and cute puppies and basically anything other than the mob, violent crime, Harvard, and so on. Expect this to be an increasingly common complaint if economically minded filmmakers follow the trail of The Women (2008) and start using "Boston Doubling" for scenes set in New York City. Ouch.

Incidentally, no two Boston residents will agree exactly where Southie begins and ends. Is the Waterfront part of Southie? How about Dorchester? Is Dorchester "really" part of Boston or is it a suburb?note though it is culturally very much like Southie either way; "I'm from fahkin Dot, bro" is a stereotype for a good reason. What about the other suburbs? Have we put way too much thought into this? (Note that the actual compass direction "South" hardly factors in.) In fact, many residents feel that "Southie" and "South Boston" are two different areas, with Southie being a tight knit Irish community and South Boston being the yuppie area right next to it.note  Never confuse the two areas in front of someone from Southie, it's a bit of a Berserk Button, and don't even try to compare it to the South End. The short version is "if you're in Boston and surrounded by working-class Irish, you're in Southie."