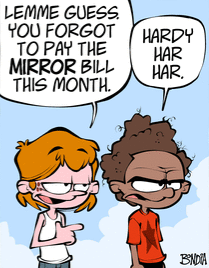 Don't worry, it will be okay again next comic.
"I can feel it coming. It's gonna be a bad hair day. "
— Garfield, Garfield
Advertisement:

Everybody has suffered from it at least once; some days, no matter what you do, your hair looks absolutely horrible, and there is nothing you can do about it except sit it out. Naturally, this tends to happen at the worst possible moments, like when you have an appointment for which you absolutely have to look your best.

Expect characters suffering from this to go to extreme lengths to hide or fix their bad hair, but getting found out sooner or later. As Status Quo Is God, these bad hair days hardly ever last longer than one episode.

A Super-Trope to Gag Haircut, My Hair Came Out Green, and Traumatic Haircut, which can be causes of the Bad Hair Day. Compare Stubborn Hair and Messy Hair, which are usually a permanent character trait rather than a one-episode issue. For its illness-related cousin, see Bedhead-itis. Very much Truth in Television.

This trope shares the same name as the album from "Weird Al" Yankovic, which can be viewed here.