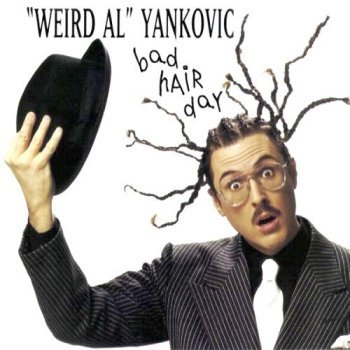 "Got a lousy haircut, a really stupid haircut..."
Bad Hair Day is the ninth studio album by "Weird Al" Yankovic, which was released in 1996.
Advertisement:

It features his hit "Amish Paradise," a parody of Coolio's "Gangsta's Paradise" which infamously got Al in trouble with the rapper, who claimed that he rejected Al's proposal to record the parody and felt that Al was trivializing the gangland drama he was attempting to bring attention to. Despite (or rather because of) the controversy, it remains one of his most popular songs and Coolio eventually made peace with it.

This was Al's last album to feature his "classic" look of a mustache and wire-rimmed glasses. Two years later, he'd have laser eye surgery and shave his upper-lip, which drastically altered his appearance. It was also his last album on longtime label Scotti Bros. Records before the company was bought out by Volcano Entertainment.

Tropin' in an Amish Paradise.