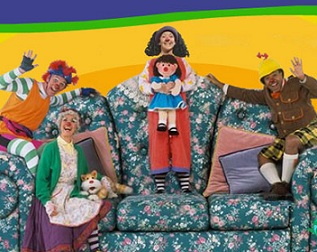 The Big Comfy Couch was a Canadian children's show from the 90's that premiered on YTV in Canada in 1992 and was then syndicated by American Public Television and Benny Smart in the United States in 1995.

It starred a female clown named Loonette (portrayed first by Alyson Court, then by Ramona Gilmour-Darling) and her doll, Molly. Both of them lived in a house with an enormous couch and a rug shaped like a clock, where Loonette would engage in a bizarre "clock stretch". Besides playing on the couch, they would visit Loonette's Granny Garbanzo and her cat Snicklefritz, and get packages from the delivery clown Major Bedhead, usually sent by Loonette's world-traveling Auntie Macassar or Uncle Chester.

And the clown jumped over the moon!