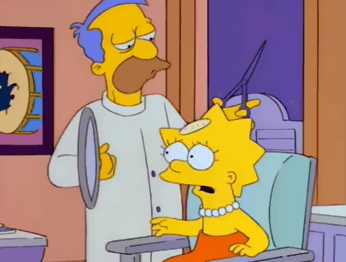 "You keep squirmin', there's going to be a little bald girl with no lollipop."
"Chuckie, you're getting your hair cut!"
— Angelica Pickles, Rugrats, "Chuckie's First Haircut".
Advertisement:

Sooner or later, someone's hair becomes too long. It covers their eyes and gets in their ears, so the ideal thing to do in this situation is to go to the barbershop and get a haircut. In the case of adult men, they might also go to the barbershop to get their beard shaven. In works involving little kids in particular, said little kids may be afraid of going to the barbershop because they think it's going to hurt, especially considering that scissors are a primary tool for the job. In the end, they'll most likely overcome their fear and may even get a lollipop for being a good customer. May also result in I Do Not Like Green Eggs and Ham if a character thinks they're going to hate getting a haircut, only to find out they like it. They will probably meet a Chatty Hairdresser or two there. If the barber is inexperienced, this may result in a Traumatic Haircut, or in some cases, a Gag Haircut. May often happen when a character's grown Wild Hair.

Compare The Dentist Episode and Injection Plot, as these can also involve appointments and dealing with one's fears (and possibly getting over them). Also see The Barber.