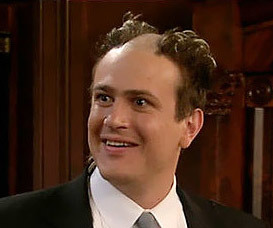 It's goofy and it's on your head!
Calvin: LOOK WHAT YOU DID TO MY HAIR! IT LOOKS LIKE IT WAS CUT WITH A WEED-EATER!
Hobbes: Nothing a little tonic and combing can't fix.
— Calvin and Hobbes
Advertisement:

Essentially every person has a Bad Hair Day, it happens. Unfortunately for these characters their bad hair days just happen to be a whole new level of bad. The character will find themselves in a situation where they need a haircut...only for the haircut to go horribly wrong. But typically the bad haircut will only last one episode and it'll be back to normal by the next episode. Usually overlaps with Traumatic Haircut except while the haircut will be traumatic for the victim, it's always Played for Laughs, so it could be seen as a subversion of the Traumatic Haircut. The situation quite often involves getting gum in the hair. Variations can include bad dye jobs which may or may not result in actual hair getting cut to solve the problem, or losing a bet and ending up with a shaved head or otherwise intentionally bad haircut.