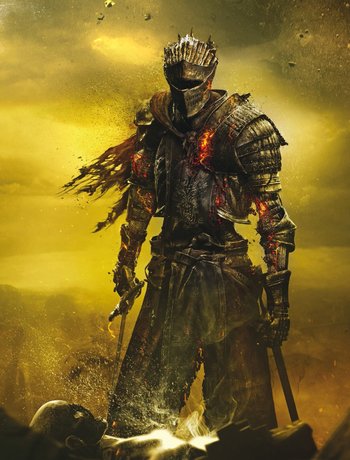 Dark Souls III is the third and final game in the Dark Fantasy Action RPG Dark Souls series, developed by FromSoftware and published by Bandai Namco Entertainment. This entry also marks the return of Hidetaka Miyazakinote director of Demon's Souls, Dark Souls, and Bloodborne as game director, after an absence from Dark Souls II. The game was released in Japan on March 26, 2016 for PlayStation 4, Xbox One and PC, with an international release on April 12th. The first bit of Downloadable Content, titled Ashes of Ariandel, was released on October 25, 2016. The second and final, The Ringed City, was released on March 28, 2017.

Once there was fire, and with it came disparity: heat and cold, life and death, light and dark. For eons untold, gods, heroes, and kings have offered themselves and the power of their souls to the supernatural "First Flame" that brought this change, in hopes of keeping the world alight. But now, only embers remain. In a world of ashes where everything of note has already been burned, where space and time itself are collapsing in on themselves from the weight of the endless eons this fading Age of Fire has been prolonged, the only hope of keeping the fire going is reviving the lords of ages past to burn what remains of their cinders. However, not even a single "Lord of Cinder" who would willingly give themselves to the First Flame is left now.

You take the role of an Unkindled, a nameless accursed undead made up of the bits of heroes past that wouldn't burn. In this purgatory abandoned by the last of the Lords of Cinder, it falls to you to take the souls of the remaining once great heirs of fire instead... to either keep the flames going yourself, or bring the world to its final end. And so it is that ash seeketh embers.

"Let the sun shine upon this Lord of Cinder."
Feedback