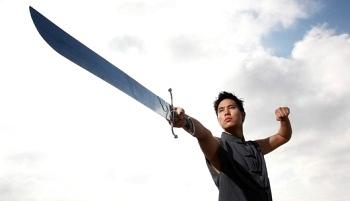 A character points their sword forward with their arm extended, either to single out and challenge a particular enemy, or to order troops under their command to attack what they’re pointing at. Depending on how heavy the weapon is, this might be hard as hell to do in real life for any extended time period.

Similar with Giving Someone the Pointer Finger, only with a weapon. Overlaps with Sean Connery Is About to Shoot You when the character is facing the audience. This can also be used with Rearing Horse for extra Cool points. Compare Stab the Sky and Sword Plant.