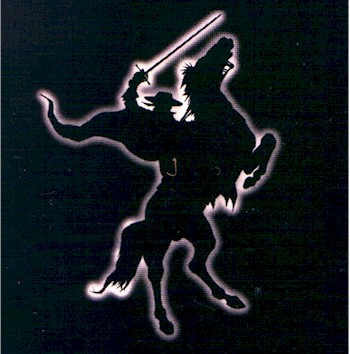 Kids, don't try this at home. You'll fall off. Or worse.
What's with all the poor freaked-out horsies on romance novel covers? Is every day Throw A Rattlesnake in Front of Your Horse Day in Romancelandia?
— Smart Bitches, Trashy Books

The Rearing Horse is an iconic pose of a horse rearing back so its front hooves are off the ground. It is used in movies because it is so dramatic, being the organic equivalent of performing a wheelie on a motorbike.

It looks wild, powerful, liberating, and, yes, cool. It ends up appearing in many cowboy movies, historical movies and European coats of arms. In heraldry, the pose is referred to as "rampant" and is so popular that it is applied to pretty much any four-legged animal, including lions, wolves, and even mythological creatures like griffins. Technically, in heraldry, a rampant animal will stand on its left hind leg, with the three other legs elevated off the ground. The rearing pose also appears on some equestrian statues, although contrary to popular myth, the horse's pose has no relation to how the rider died.

In real life, it's a Very Bad Thing, and only experienced trainers should even get on a horse with a rearing habit (although there is a difference between an actual rear and several of the dressage moves known as the "Airs Above the Ground").note One is on command, and one is not. This difference is important. There is an important physical difference too, to do with the angle above the horizontal at which the torso is held: in the Airs, the horse remains well-balanced and in control of its movements, with the body held low over bent legs so it'll fall forward. In a rear, everything goes up near-vertically on a very narrow base, and is prone to toppling, especially if the horse is agitated. It is very easy to cause a rearing horse to fall over backwards on top of the rider, which can easily lead to serious injuries or even death. note When it comes to shooting these moments in films, stunt horses can be trained to rear on command; as this is a commanded behavior rather than a panic response, it's more controlled and less dangerous. It's still generally not recommended for inexperienced riders.

Often combined with Stab the Sky or Sword Pointing.

Arguably the most iconic scene in the movie.

Arguably the most iconic scene in the movie.