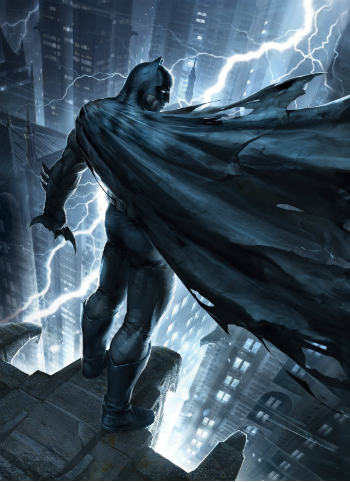 "You try to hold me back, but you're weak... You know it in your soul... You're nothing but a hollow shell... A rusty trap... The time has come."
— The Batman.
Advertisement:

A film in the DC Universe Animated Original Movies line, based on the comic of the same name. Batman has been retired for ten years, alcoholic and consumed with grief after the death of Jason Todd. Superman, still as young and handsome as ever, has become little more than an icon, answering to the government and trying to stay as neutral as possible. Commissioner Gordon is weeks away from retirement, The Joker has been silently locked away in Arkham for years, and Two-Face is about to be released back into the world with a brand new skin. In Batman's absence, and in the midst of a killer heat wave, Gotham City is overrun with crime, plagued by a monstrously violent gang known as The Mutants. After encountering a Mutant gang in the alley where his parents were murdered, Bruce Wayne resurrects Batman, aided in his renewed crusade by Carrie Kelley, a 13-year-old girl who becomes the new Robin. Defeating the Mutants, though, turns out to be child's play compared to what Batman faces next...

The movie is split into two parts. Part 1 (trailer

Tropes demonstrated in this film include:

After being in a coma for 10 years, Joker shows that he has not changed one bit by killing an entire studio audience.

After being in a coma for 10 years, Joker shows that he has not changed one bit by killing an entire studio audience.