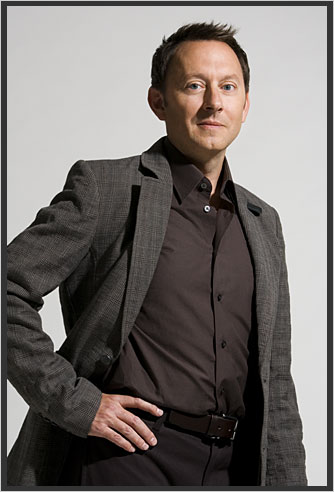 "I've played villains on stage - you know, the Iagos and so on - but I think of myself as a funny person. I mostly did comedies before I did TV work."
— Michael Emerson
Advertisement:

Michael Emerson (born September 7, 1954 in Cedar Rapids, Iowa) is best known for playing Benjamin Linus on the show Lost. He also portrayed Zep Hindle in the Saw movies, Marty Manning in the short-lived Tim Minear show The Inside, and William Hinks in The Practice, for which he won an Emmy. He won a second Emmy for his role as Benjamin Linus. Others might recognize him from an earlier role as the mysterious narrator of Neil Gaiman's Murder Mysteries radio play. From 2011-2016, he starred as the enigmatic Harold Finch on the CBS action-thriller Person of Interest. A well-respected character actor, Emerson is known for his piercing eyes, distinctive voice, deadpan humor and quiet intensity. He's particularly renowned for his portrayals of complex, enigmatic and intelligent characters - meaning he often gets typecast as "the villain guy", although he's actually quite versatile.

Despite his tendency to play deeply scary characters, he's best known in theatre for his comedic talent. In real life, he's a sweet, funny guy with a great sense of humor who does plenty of charity work. He's married to actress Carrie Preston, who has played his short-lived mother on Lost and his ex-fiancee in Person of Interest.