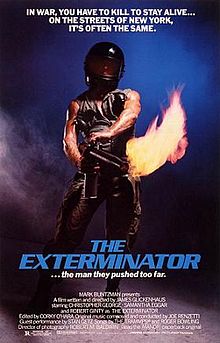 The Exterminator is a 1980 action film starring Robert Ginty as John Eastland and Steve James, then a stuntman, on his first speaking role. It was directed by James Glickenhaus, the producer of Maniac Cop and the Basket Case sequels.

Some time after a traumatic tour of duty in Vietnam, John Eastland is working with his war buddy Michael Jefferson at a New York City meat packing plant, and life is good...until a group of thugs (the Ghetto Ghouls) cripple Jefferson. Eastland takes his revenge on the thugs, but doesn't stop there, taking on every lowlife possible. He gives the press his moniker of "The Exterminator" and draws public support, but is drawn into conflict with various law enforcement agencies, including the CIA who misunderstands his motives.

The Exterminator was followed by a 1984 sequel, Exterminator 2, starring Robert Ginty back on the titular role, Mario Van Peebles as X, and Deborah Geffner. It was directed by the producer of the first film, Mark Buntzman. Eastland returns to take on the gang leader X, who killed his girlfriend in retaliation for Eastland killing members of his gang and X's younger brother for robbing a store and killing its owners in cold blood.

The Exterminator provides examples of: