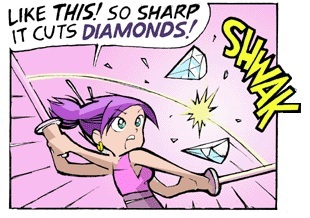 "I can tell you with no ego this is my finest sword. If on your journey, you should encounter God, God will be cut."
— Hattori Hanzo, Kill Bill

An absurdly sharp blade is a bladed weapon with Absurd Cutting Power because it's just that damn sharp. No magic, technology, superpowers, or other type of Applied Phlebotinum required to slice and dice to your heart's content. Such things may have been involved in the production of the blade, but when in use, its cutting power comes from its pure physical sharpness alone.

Blades like these almost always result in a Clean Cut — in fact, about the only thing they can't cut is a similarly sharp weapon. Expect to hear some Audible Sharpness (Audible Gleam optional) whenever one of these blades is in use. Frequently used in Single-Stroke Battles. Be very afraid if an Absurdly Sharp Blade is in the hands of a swordsman with Implausible Fencing Powers; luckily, the Inverse Law of Sharpness and Accuracy usually ensures that it isn't.

Sharpened to a Single Atom is a subtrope popular in Science Fiction settings, where the blade is so sharp that the width of the cutting edge can be measured in atoms or molecules. See Absurdly Sharp Claws when the ASB is a Natural Weapon.

Scissors' blades are so sharp that they effortlessly cut Mario in half.

Scissors' blades are so sharp that they effortlessly cut Mario in half.