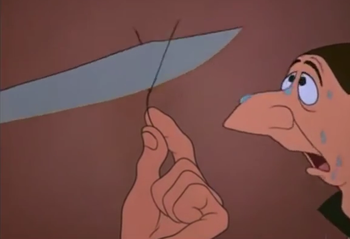 If it can cut through something this small, imagine what it can do to the rest of you!
Advertisement:

One way of showing the sharpness of a blade is dropping a strand of hair, or thread, on it and watch it split it in half. Not to be confused with splitting hairs, which is about fine distinctions.