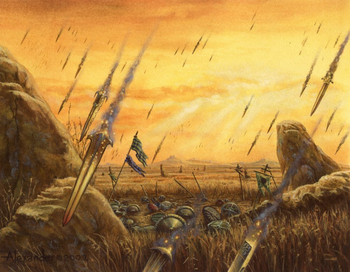 It's raining swords. Hallelujah!
"Sunny with the occasional rain of swords. That's pretty nasty weather."
— So I'm a Spider, So What?
Advertisement:

You know how Throwing Your Sword Always Works? Well, let's crank that up a pinch with some Beam Spam thrown in; and you've got this Death In All Directions trope.

The Storm of Blades is a multitude of sharp objects descending upon the enemy. Just as potent as the stabby death is the Symbolism of the Sword, squared. Aggression, offense, smite. Sister Trope to Flechette Storm, Rain of Arrows and Blade Spam. It will typically involve Flying Weapons although versions when the swords are thrown exist. Also logically this trope will naturally end up with a Field of Blades.

Not to be confused with the Stormblade, a close cousin to the most famous Tank Goodness vehicle known to all of Table-Top, or the novel A Storm of Swords.