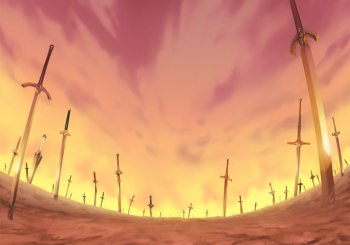 A desolate land. A graveyard of swords, devoid of life.
The swords stand like trees in a forest. It's not just ten or twenty. Not a hundred or two hundred. No matter how many there are, if it is impossible for them to be counted, they might as well be infinite.
The tools are rusting without anybody to use them. A ruin of infinite swords. [...] It is like a graveyard.
— Fate/stay night
Advertisement:

The field of blades seems to be the representation of Endless Struggle and Utter War. It's a desert with swords sticking in the ground by their blades. The battle seems eternal for whoever walks it.

It's most likely a graveyard for warriors with swords standing in for proper headstones. If the swords are supposed to have fallen there, it'll generally be a case of The Blade Always Lands Pointy End In. This can also be the end result of someone causing a Storm of Blades.