All spoilers for Fire Emblem: Shadow Dragon & the Blade of Light will be left unmarked. You Have Been Warned! 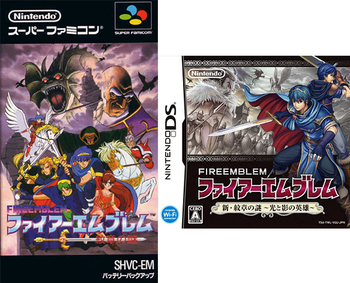 Fire Emblem: Mystery of the Emblem is the third entry in the Fire Emblem series, released only in Japan on the Super Famicom in 1994. It comprises both a compressed remake of Fire Emblem: Shadow Dragon & the Blade of Light (Book 1) and a new sequel (Book 2), giving players the option to skip to the sequel if they're already familiar with the original game.

In the sequel, several years after the fall of Medeus, Marth is dispatched by the newly-crowned Emperor Hardin of Archanea to deal with an uprising in Grust but is appalled to find his "allies" are instead brutally oppressing the citizens. Marth gathers a liberation army to fight back against the now corrupt Archanean Empire. As he fights through his new enemies, Marth slowly learns more about Archanea's Fire Emblem and the lore behind it, hence the title "Mystery of the Emblem".