Spoilers for Fire Emblem: Radiant Dawn will remain tagged as usual. However, being a direct sequel to Fire Emblem: Path of Radiance, this page does contain unmarked spoilers for that game. You Have Been Warned! 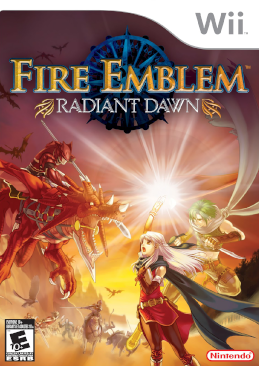 Fire Emblem: Radiant Dawn is the tenth entry in the Fire Emblem series, released on the Wii in 2007. It is a direct sequel to Fire Emblem: Path of Radiance, taking place three years after its ending.

Radiant Dawn is divided into four parts, each starring a different main character. The first arc features Micaiah, the leader of the Dawn Brigade, in her work to liberate the country of Daein from its abuse at the hands of its post-war Begnion occupation, an act which instigates the conflict to come. Following arcs feature Elincia, now queen of Crimea, dealing with rebellious nobles, and Ike and his mercenaries aiding the Laguz kingdoms in a war against an apparently corrupt Begnion, with the final arc bringing all the characters together in order to avert the destruction of their world.