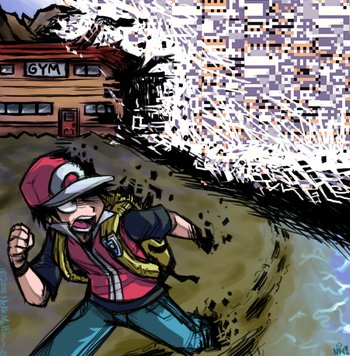 Run as you may. You cannot escape.

. Used with permission.
"This huge oversight renders the rest of the game moot and reduces an otherwise enjoyable game to a pointless exercise, making it one of the most shameful QA blunders in all of video gaming."
— William Cassidy of GameSpy on the Atari 7800 port of Impossible Mission
Advertisement:

The dark side of Good Bad Bugs (though not necessarily mutually exclusive) and a Griefer's favorite variety, Game-Breaking Bugs are severe bugs that cripple your ability to play the game involved. They’re almost as old as gaming itself.

Game-Breaking Bugs were more prevalent in the earlier days of gaming. Many games that were made after The '90s seem so much easier because of the reduction in such bugs on average. It was also The Problem with Licensed Games incarnate, since several licensed games actually may not have been as bad as many people say they were... if not for game-breaking bugs that slipped past the beta testings (if there were any) and made them literally unplayable or Nintendo Hard.

In these days of mainstream, multi-million dollar titles, developers seem to favor release dates over thorough quality assurance. With the advent of integrated network play, developers also seem to favor releasing patch after patch (if they even bother) and treat their paying customers as unpaid testers. The flaw with this approach is that it alienates a sizable chunk of gamers (in this case, gamers who live in a house without a high-speed internet connection).

The growing prevalence of Wreaking Havok (especially in the context of facilitating emergent gameplay) can often cause essential game entities to be launched or pushed into places outside the player's reach or destroyed through unexpected methods. The sheer number of possible outcomes makes this type of game-breaking impossible to fully prevent and even the few games lauded for their stability have an occasional hiccup for which the developers can only suggest reloading a saved game.

Note that the presence of one of these doesn't necessarily make the game itself bad; many programs have been quite entertaining despite horrible bugs. One should also probably keep in mind that a lot of bugs only occur in certain builds of the game. In today's market, where even console games can be patched, it's incredibly rare to have a game-killing glitch maintain itself for very long. The very worst of these can cause a game to be Unintentionally Unwinnable no matter what the player does (except, possibly through a counteracting Good Bad Bug).

Bugs that always happen at the same point of an Endless Game are known as Kill Screens. Not necessarily the same as a Game-Breaker that results from a programming bug; those are typically Good Bad Bugs, which are harmless, but examples of ones that use Game-Breaking Bugs exist; read on...

Bugs that render it completely impossible to make progress in a game are referred to as "softlocks" and can be fixed by reloading your save file. This is in contrast with "hardlocks" which permanently damage the file so reloading it just puts you back into the lock.

Sub-trope to Unintentionally Unwinnable. A frequent reason for an Obvious Rule Patch. When something simple in a story causes the end of everything, it's a Reality-Breaking Paradox.