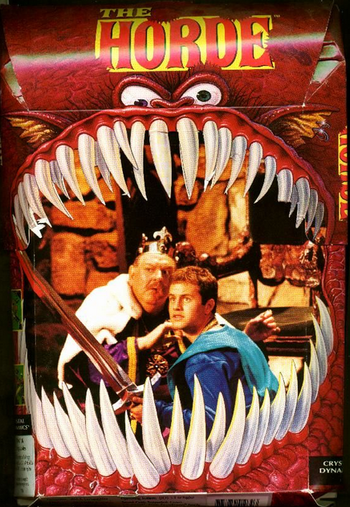 The Horde is a 1994 "defense" video game developed by Toys for Bob (Star Control) and published by Crystal Dynamics. It was initially released for 3DO, but was soon ported to Sega Saturn and DOS PCs.
Advertisement:

The player is Chauncey, a peasant orphan Raised By Cows (yes) who lives in the kingdom of Franzpowanki. While serving at a royal banquet, he saves King Winthrop the Good from choking and is knighted, awarded with the deed to the Shimto Plains and the sword Grimthwacker. Chauncey then builds the plains into thriving village, frequently having to defend them from the titular Horde. After building a prosperous village and wiping out enough of the Horde, he is given the deed to other areas. Each of the additional areas contain gimmicks, for example the desert level requires you to irrigate the land (build a moat) to be able to get the grass needed to build anything.

The Horde provides examples of: