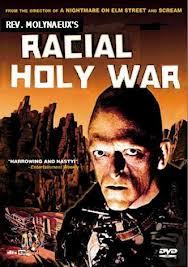 Yes. This cover was stolen from The Hills Have Eyes.
Advertisement:

RaHoWa is a tabletop game by Reverend Molyneux, a "priest" for a White Supremacist cult called the Church of the Creator, a.k.a. the Creativity Movement, whose content is exactly what you might expect from such a person. The setting is a 20 Minutes into the Future society on the verge of collapse thanks to the sinister Jewish Illuminati and the growth of minorities to the point where Caucasians have become the hated and oppressed minority. The players control a cell of "White Warriors" on a self-appointed mission to "cleanse the vermin" and "bring about a glorious White Empire."

On top of its incredibly racist subject matter, RaHoWa is also infamous for its incomplete manual and gameplay mechanics that are muddled and half-baked at best and completely nonsensical at worst, requiring House Rules to fill in the missing pieces. There is, for example, no way to calculate base accuracy with firearms, nor stats for weapons. This is not a small problem, as the game is centered around ranged combat, with only one class capable of melee without buying the skill separately. There's even two pages describing what weapon stats are and mean, and still none are provided until a correction was printed.

Mechanically, a character starts with a hundred points to spread across eight attributes (max of 30) and a thousand credits for gear. There are eight classes (Gladiator, Leader, Soldier, Scholar, Sniper, Hero, Athlete and Medic) each providing a special bonus and a few stat bonuses, plus two skills. The player chooses two further skills. Each time the PC levels, they get 100 points that can be spent thus: 50 points to learn a new skill, 20 to level an old one (each skill has five levels, cannot raise by more than one at a time) 20 points to buff a base stat by 1 (almost worthless, each stat has a skill that raises it by more) 5 points can be spent to raise HP by 1, and points can be converted to in-game money at a 1:5 ratio, so 500 credits if you dump the whole level into cash.

Other features include a punishing encumbrance mechanic and guns that also gain experience and level, gaining bonus damage and accuracy, as well as "gun speed" (initiative) bonuses. Then there's the "fun" of racist caricature enemies and suggested missions like assassinating celebrities or busting cartels.