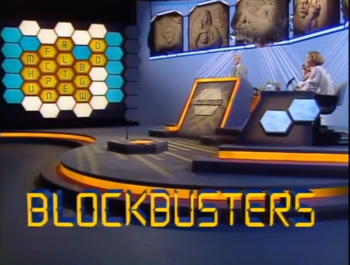 It's time to play Blockbusters!
"This is the battlefield for our game of speed and strategy. These are the letters which lead to victory on Blockbusters!"
Advertisement:

Game Show created by Mark Goodson-Bill Todman Productions which aired on NBC from 1980 to 1982 with Bill Cullen as host. It was basically a game-show version of the board game Hex, featuring a 5-by-4 board of hexagons, each containing a letter that was also the first letter in an answer to a question (e.g., "What 'K' did Miss Piggy have a crush on?"Answer Kermit the Frog). The original version was also noted for the fact that it pitted one player against a "family pair" (i.e., two closely related people playing together); the family pair had to make a connection of white hexagons going across, while the solo player worked from top to bottom with red hexagons. The game was played best-of-three, and the winner went on to the Gold Run (or Gold Rush) Bonus Round.

A revival aired for a few months in 1987 with Bill Rafferty as host, and the family pair replaced by another solo player. On May 4, it was replaced by Classic Concentration.

Blockbusters has been more of a long runner in the United Kingdom, running in various forms from 1983 to 2001 on ITV, Sky One and BBC Two, a one-off special as part of the 2007 Gameshow Marathon, and two revival series, firstly on Challenge from May to August 2012 followed by a second on Comedy Central in 2019.

Not to be confused with the Work Com Blockbuster.

"What 'T' refers to a literary device or convention, can also describe a term in music, philosophy, or math, and is often catalogued on a fan wiki whose name begins with 'TV'?"