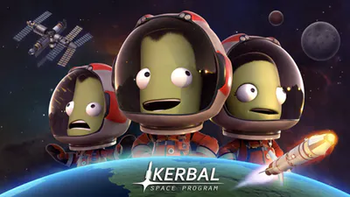 "How hard can rocket science be, anyway?"
Advertisement:

Kerbal Space Program is a game about a green humanoid species known as the Kerbals as they start a space program. Superficially similar to Orbiter, the difference between the two has been likened to the difference between making to-scale miniatures for architectural design and playing with LEGO bricks with rocket fuel in them, which you then hurl with glee at your sisternote Although the Real Solar System and Realism Overhaul mods let you be more like the former.

The game offers three game modes to suit your style of play. The first is little more than a sandbox. You're set loose upon a space center complete with a vehicle assembly building and a launch pad, a bin full of rocket parts, ground personnel composed entirely of yes-men who build and wheel onto the launch pad anything you design no matter how crazy it is, and some astronauts to crew your creations. The second version is Science, in which you have to conduct experiments in order to unlock various piece parts, as you start off with just the very basics. The third mode is full-blown Career mode, and you have to juggle a budget, job offers, your Kerbonauts and conduct Science similar to the Science mode (which used to be the old Career mode, prior to 0.24). Essentially, you have to manage the entire Space Program. The number of parts has risen dramatically in later releases, and the community is cranking out fanmade addons at an impressive pace on top of that.

After four and a half years of development, version 1.0 was released on April 27th, 2015. This version, on top of taking the game out of Early Access, added the last gameplay mechanics that were left to implement: Aerodynamics, heating, fairings, resource mining and, last but not least, female Kerbonauts.

, and a trailer for the game can be found here

. Starting with 0.19, it's also available on Steam. It was ported to PlayStation 4 and Xbox One in July 2016, and a Wii U version was announced, but never released.

In 2017, Kerbal Space Program was purchased by Take-Two Interactive. The game's terms of service were changed to reflect this in early 2018, with all users having to accept the new terms in order to continue accessing the official site and the latest updates.

To the surprise of almost everyone, a proper sequel simply titled Kerbal Space Program 2 was announced at 2019's Gamescom

will be released. While bugfixes will continue to come out, Squad will focus on working with Intercept Games on Kerbal Space Program 2.

Due to the vast community, modding tools, and easiness, there are plenty of mods that greatly changed how the game functions from stock. Listed below are some examples:

Example of:
Everything Breaks