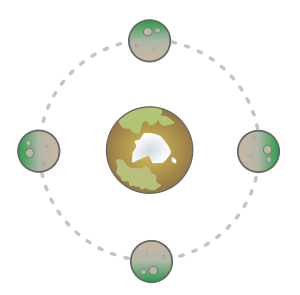 Honestly, it gets a little boring looking at the same side of the Moon all the time. Source

"What I meant, sir, is that Daled IV rotates only once per revolution. Therefore one side is constantly dark, and the other side constantly light. One might surmise that the two hemispheres have developed disparate cultures, which is a major cause of most wars."
— Lt. Cdr. Data, "The Dauphin", Star Trek: The Next Generation
Advertisement:

is the result of a body (a planet around a star or a moon around a planet) being close enough to its parent that the pull of gravity on the satellite is stronger on the facing side than on the othernote This is actually always the case, but it's particularly noticeable if the satellite is very close to the primary or the primary's gravitational field is very intense. Over astronomical timescales, the parent body's gravity will slow the satellite's rotation until one side always faces the parent and the other always faces away.

Because of this mechanism, a planet orbiting a star in this fashion will be Always Night on one side while the other will have Endless Daytime. Originally it was thought that the starward side would always be a blazing hot desert and the night side freezing cold. More recent computer models indicate that, assuming the planet has an atmosphere, convection currents will transfer hot air from the day side to the night side and bring cold air to the day side, alleviating the extremes somewhat. It's also been suggested

that thick cloud cover would build up on the day side of tidally locked planets, reflecting much of the sunlight and keeping the day side relatively cool.

Also known as a Twilight Planet, in reference to the perpetual twilight experienced by the narrow band between the starward side and dark-side. It is guessed that this narrow band may be capable of supporting life, and is a popular way to make a planet unique. In science fiction most of the population of a tidally locked world will inhabit this region, where the climate is fairly temperate.

This is thought to be an especially likely scenario for planets orbiting red dwarf stars. Since red dwarfs are much cooler and dimmer than other stars, any planets orbiting them would need to be very close to their sun to be habitable. Thus, while tidally-locked planets around other stars are generally too hot to host any kind of life, many or most livable worlds around red dwarfs would instead likely be locked in this manner.