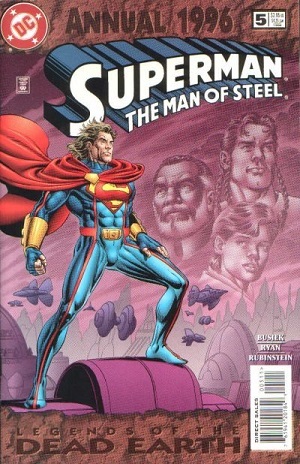 Legends of the Dead Earth was an event published by DC Comics in 1996.
Advertisement:

The idea was that each annual issue for every main DC series would take place in the far future, in a time when the planet Earth is long dead. Humanity has moved on to different planets and galaxies, some reverting to more primitive and medieval cultures while others have advanced far more rapidly. And despite how long it has been since Earth's death, the influence of the DCU's heroes and villains are seeped into almost every world humanity now lives on.

Some of the stories centered around how the legacies of Batman, Superman, and others have evolved over the centuries, while others were about how the histories of certain heroes and villains had been comically or grossly distorted through the ages.

The annuals were largely considered to be out-of-continuity stories, although some were tied directly into the main DC continuity, such as in the Legion of Super-Heroes related annuals, the Power of Shazam annual, and the Starman annual.

This imprint provides examples of: